In the EU Parliament, the EU top jobs in back rooms are filled with deals.

Who is currently looking at Brussels from home, inevitably asks: EU, what is this democracy for the EU election? Instead of Manfred Weber (46), representative of the EPP, the largest group in the European Parliament, the most powerful To elect EU officials, the heads of st

ate governments suddenly conjured up Ursula von der Leyen (60). The German Minister of Defense is to become EU Commission President. Special deals in back rooms bring the new EU leader for the commission in daylight, that's not democratie...

That was promised differently to the 50 percent of the millions of eligible EU citizens who went to the polls in May. For the second time, the party blocs started with top candidates - these were then to enter the race for the commission's presidency.

It worked well five years ago: Juncker was the EPP's lead candidate and became the strongest party - so he was elected. Not so in 2018. Emmanuel Macron, a Rothschilds banker, does not want Manfred Weber to be elected head of the EU Commission. French President said "Non" before and he also says "Non" afterwards. Top candidates Principle? "Non". Manfred Weber as head of the EU Commission? "Non". The Niederbayer was too inexperienced, has molested Macron for months. He can not do that, he will not. In fact, from the very beginning, France's president was less concerned with Weber's political weight-class than with the fact that his own mini-movement "En marche" in parliament does not bring enough balance to play a key role in the Freestyle.

Those would have been the candidates for the election of the head of the EU Commission:

According to a report of the "Welt am Sonntag" on the sidelines of the G20 summit, the heads of state of the EU decided that Manfred Weber would not become President of the European Commission. Thus, after the election day, an unworthy backroom deal took place among the heads of state - from which Leyen now emerges victorious. And why do not the EU parliamentarians protest? Probably because they are royally paid for their role play, with which they attach a democratic cloak to the EU exploitation apparatus, often far better than in the national parliaments. In addition, many of the EU parliamentarians are shabby politicians from national parliaments who are no longer used at home, and who want to spend a well-endowed, soft pillow in Brussels. Loser is the European democracy and I hope an end to the faith Elections would bring something. For the will of over 500 million EU citizens has nothing to do with the appointment of Leyen. This is also the view of National Councilor Roland Rino Büchel (53), who sits in the Council of Europe for Switzerland.

«That's a shame on the voters - why should they even go to the polls?»,

he scolds. This is how the EU is slowly getting rid of itself.

But how did Mrs. Merkel say:

which, as she said on the same day, is repeated here or there. becomes .

The European elections in 2019 are over and somehow everything and nothing has changed: The SPD loses (again) clearly, the Greens are still on the up and yes, the FDP is still there. European election is also always increased burnout danger for ARD election man Jörg Schönenborn, who was allowed to read the first forecast yesterday at 6:00 pm again in the election yesterday. In addition to the significantly higher voter turnout compared to 2014, the Greens are the winners of the European elections: with 20.5 percent, which means an increase of almost 10 percent to 2014, the former revolution and eco party is the second strongest force in Germany , Behind the union, which comes to 28.9 percent together with its small Bavarian sister (- 6.4 percent to 2014). In addition to the Union and the GroKo partner SPD was properly punished: 15.8 percent, or just 11.5 percent loss to 2014, you have to get that even as a SPD so once. The FDP and the Left rank equally at 5.5 and 5.4 percent, while the so-called "Alternative for Germany" accounts for a good 11 percent of the vote.

Shortly before the EU election, a Youtube video came into the public eye, which had a not insignificant impact on the outcome of the election in Germany and in particular brought the Greens quite a few votes, this in the election a powerful leap to the top made. Leading actor of the video is the Youtuber Rezo. The owner of the Rezo-Youtube channel is the media agency Tube One, which specializes in influencing campaigns and which in turn is part of the Ströer Group, which specializes in advertising. 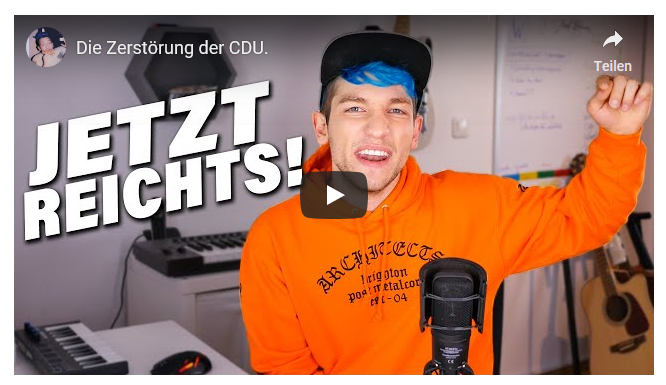 The Impressum from Rezo-Kanals contains, among other things, the following information:

In this Rezo video of the Ströer Group and in a following video in which several other Youtuber occurred, CDU, CSU, SPD and AfD are legitimately harshly criticized, the Greens, however, not. Equally important is the topic of climate change, which is regarded as the core theme of the now-neoliberal and ever-ready-for-war Greens, even if the party regularly abandons its alleged environmental principles when it comes to co-governing. As a small I destroy the CDU video, a whole campaign was camouflaged and carried out for the Greens. In the boat and used as a figurehead was the Youtuber Rezo, who has a youth to wire through his Youtube channel. So all manipulation at the right time with the right means.

The EU Parliament itself has given a big boost to lure more voters to submit the vote and the ballot box.

2019 should no longer be called only for election, but with various bundled initiatives, the EU institutions together tried to increase voter turnout throughout Europe. In addition, EU citizens should be encouraged to persuade themselves to vote. The mobilization and personal address of the people for the "Future of Europe" were in the foreground. Networking, citizen and youth forums, numerous events, media competitions and interactive websites on "What is the EU doing for me?" flanked the main campaign under the slogan: 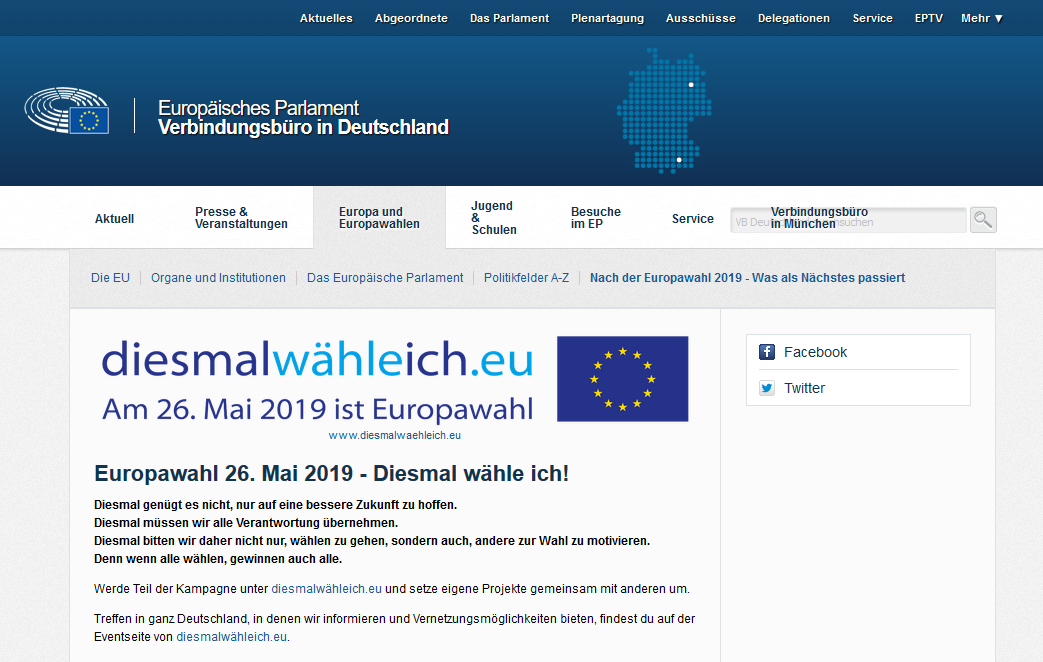 The non-partisan platform diesmalwaehleich.eu was put online this autumn by the European Parliament in 24 languages. It was decentralized and locally oriented, trying to create networks and to engage voters with general and individual information. In addition, anyone with different formats could become an active part of the campaign. Quote from the European Parliament on the initiative: Diesmalwaehleich.eu wants to raise the awareness of all citizens for their right to vote and to vote on the future of Europe:

„It is not enough to hope for a better future; This time, each and every one of us has to take responsibility for it.“

Just as someone who has actively participated in this campaign, the disappointment will be great, because all agree and actions are null and void after the election, because the said before the election does not have to apply after that.

The last sentence, or the last promise actually says more than any other: "For if everyone chooses, everyone will win." This motivates people who still believe in the elections. That it did not turn out then we see the outcome of the election to the head of the EU Commission, it is simply dealt with after the successful election of Mr. Weber and it comes a new boss in the chair, Ms. von der Leyen. We do not all win and never will. As long as the banks and corporations govern the governments, a vote is obsolete. I have the feeling that the elites in Europe are in Brussels together to form the one supra-government that decides on Europe in their own interests, for the banks and large corporations. Now it makes sense that Mrs. Merkel no longer wants a new term of office and also gives the party executive. To whom she gives both posts and who the Nachvolger will play no role because the governments of the individual states in Europe are also obsolete, are no longer needed. Everyone who is still in the Bilderberger and Elite group is now in Brussels. All other politicians are unfortunately no longer there.

"The voters were deceived and betrayed"

The fact that the European Council has ignored the top candidate model, causing great harm to the EU, said former EU Commissioner Günter Verheugen in the Df. The disenchantment with democracy is thereby increased. The EU could also be heading for a crisis between the Council and Parliament.

The decision of the EU Council increases voter disenchantment with politics, Verheugen said in the Dlf. "The damage is great and the consequences are not yet foreseeable". The approval of the European idea would go back thereby. The EU could also be heading towards an institutional crisis. A long-lasting conflict between the Council and Parliament is not excluded. "If the European Parliament wants to keep its self-respect, it can not support this package," Verheugen said. "I have seen this Parliament as very rigorous when it comes to its own interests and power claims."

The EU is so democratic and the Parliament as the millions of EU citizens have chosen! If you do not realize that it's a show to choose, it's not going to help. The Bilderbergers determine the posts in the EU, because almost all are Bilderbergers and it shows again, who takes part in the Bilderberg conferences makes a career jump, is chosen by them to higher. There's another saying that Bilderberg is a harmless coffee party where nothing is decided. Leyen and Lagarde were in Dresden together in 2016 at the Bilderberg Conference. The Bilderberger Macron (2014 in Copenhagen) has proposed the German Leyen and in return of Merkel (Bilderberg 2005) get the French Christine as ECB boss. DEAL = European democracy!

It is in fact the EUSDSR, where a cabal behind the scenes determines the leadership and the EU citizens have nothing at all to say nothing and are not asked.
Yes, these are the "European values" that the EU represents and exports to the world. Instead of the drinking nose Jean-Claude Juncker, there is Ursula von der Leyen as supreme EU head. Well then cheers! Democracy is different and I hope that finally more people understand that it is not reassurance for the individual to choose and think I have done my duty. With the choice of one or the other party, the system and Europe can not be changed, EVERYONE SHOULD BE CLEAR!