Germany or not? Germany and the peace treaty

Germany or not? Germany and the peace treaty

Germany the Germans? If we were German? 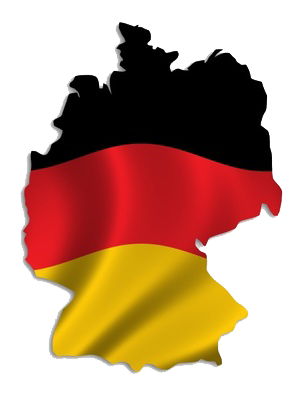 More and more people have the problem that they can not be issued a German nationality. Even election workers to the European election will or can not be issued German citizenship, although they have to submit this as an election aide, but not because they can not get them handed. The identity card or Federal passport are not sufficient to prove a German nationality. Are we now a state or not watching yourself both videos and forming YOUR OPINION

The video should have looked at each time to understand what is going on in this country, with our high bureaucracy, and what, or who, we actually are. Election workers and MPs have no opportunity to prove their nationality, as there are no valid German identity papers (identity card or passport) for this! Only by applying for extra proof of nationality is it possible for the German citizen to prove his provenance legally. See the video.

I found here a newspaper from the year 1952 where the then USSR, 7 years after the end of the war, proposes a peace treaty for Germany.

12th March 1952. On Monday, the Deputy Minister of Foreign Affairs of the USSR, AA Gromyko, the Ambassador of Great Britain, Mr. Gascoigne, presented to the Chargé d'Affaires of the USA, Mr. Oshaugnessy, and to the Managing Director of France, Mr. Brionval, a note from the Soviet Government Question of preparing a peace treaty with Germany. The note is attached to the Soviet draft for the foundations of a peace treaty with Germany. 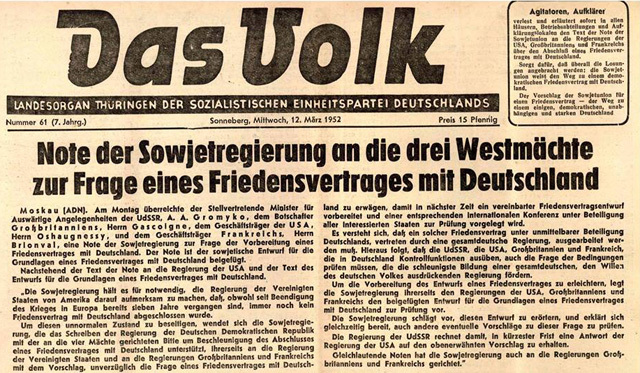 "The Soviet Union considers it necessary to draw the attention of the United States Government to the fact that seven years have passed since the end of the war in Europe and that no peace treaty has been concluded with Germany. In order to remedy this abnormal situation, the Soviet Government, which supports the letter of the Government of the German Democratic Republic with the request to the Four Powers to accelerate the conclusion of a peace treaty with Germany, turns to the United States Government and Government to the Governments of Great Britain and France with the proposal to consider without delay the question of a peace treaty with Germany so that an agreed draft peace treaty can be prepared and submitted to a relevant International Conference involving all interested States for consideration in the near future. It is understood that such a peace treaty must be drawn up with the direct participation of Germany, represented by an all-German government. It follows that the USSR, the United States, the United Kingdom and France, which exercise control functions in Germany, must also examine the question of the conditions which promote the swiftest formation of an all-German government expressing the will of the German people.

In order to facilitate the preparation of a draft peace treaty, the Soviet Government, for your part, presents to the governments of the United States, Great Britain and France, for consideration, the annexed draft for the foundations of a peace treaty with Germany.

The Soviet Government proposes to discuss this draft and at the same time agrees to examine any other possible proposals on this issue. The Government of the USSR expects to receive, as soon as possible, a response from the US Government to the above-mentioned proposal.

The Soviet government has also addressed identical notes to the governments of Great Britain and France. "

Fundamentals of the peace treaty with Germany

Britain, the Soviet Union, the United States, France, Poland, Czechoslovakia, Belgium, Holland and the other states that participated in the war against Germany with their forces.

first Germany is restored as a unified state. This will put an end to the division of Germany, and the unified Germany will gain the opportunity to develop as an independent, democratic, peace-loving state.

second All forces of the Occupying Powers must be withdrawn from Germany at the latest one year after the entry into force of the peace treaty. At the same time all foreign military bases on the territory of Germany are liquidated.

3rd The German people must be guaranteed the democratic rights so that all persons under German jurisdiction, without distinction of race, sex, language or religion, enjoy human rights and fundamental freedoms, including freedom of speech, freedom of the press, freedom of religion, the freedom of political conviction and freedom of assembly.

4th In Germany free activity must be guaranteed to democratic parties and organizations; they must have the right to decide freely on their internal affairs, to hold meetings and assemblies, to enjoy freedom of press and publication.

5th On the territory of Germany organizations that are hostile to democracy and the cause of the preservation of peace can not exist.

sixth All former members of the German Army, including officers and generals, all former Nazis, with the exception of those who serve sentences for crimes committed by them, must be granted the same civil and political rights as all other German citizens to participate in Building a peace-loving, democratic Germany.

seventh Germany undertakes not to enter into any coalitions or military alliances directed against any state that has participated with its forces in the war against Germany.

first Germany will be allowed to have its own national armed forces (land, air and naval forces) necessary for the defense of the country.

second Germany will be allowed to produce war materiel and equipment whose quantity or types shall not exceed the limits of what is necessary for the armed forces established by Germany for the peace treaty.

Germany and the United Nations

The states that have signed the peace treaty with Germany will support Germany's request to join the United Nations organizations ...

Agitators, Enlightener, immediately leaves the text of the Note of the Soviet Union to the governments of the United States, Great Britain and France in all houses, factories and reconnaissance localities about the conclusion of a peace treaty with Germany.

Make sure the solutions are applied everywhere: the Soviet Union points the way to a democratic peace treaty with Germany.

The Soviet Union's proposal for a peace treaty - the road to a united and strong Germany.

Extract from the printed edition of the newspaper "Das Volk".

That was the situation in 1952 ... but to this day no change can be found where a peace treaty would be available for Germany.